Chambers Plumbing & Heating Inc., located in Loveland, CO, has provided friendly and knowledgeable premium plumbing services for homeowners and business owners since 1921. Our team of experienced plumbers has all of the necessary skills and training to repair damage to any of your bathroom fixtures, HVAC units, and kitchen fixtures. No matter what condition or state your plumbing system is in, rely on us to find a competitively priced and permanent solution. Below are some of the services we provide.

Our plumbing company has everything you need for your bathroom. No matter what fixtures you want to add to your bathroom, we have it. And if we don't, we can special order it for you. We carry products from top-tier brands, including American Standard, Delta, Kohler, and others.

An efficient heating and conditioning system keeps you comfortable and keeps your energy costs down. If you have an older system that needs to be replaced, we have plenty of high-quality brands that are sure to meet your needs. Our new 95%+ efficient condensing boilers and furnaces are available for both residential and commercial use. They warm your property quicker and help you save money. Visit our LG page to learn more. 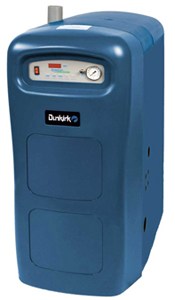 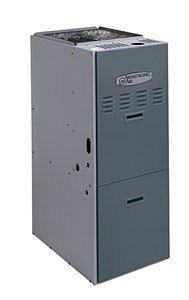 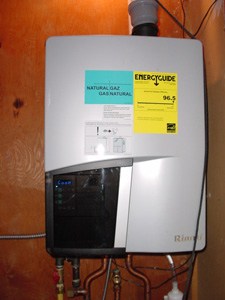 Our contractors help you create the kitchen that you have always dreamed of having. Any fixture you want, we can get for you. We carry reputable brands, such as Delta, American Standard, Vitra, Gerber, and Kohler. Discuss your ideas with our local distributors to find out the design and installation costs.

Hot Water Anywhere was developed so that people could have access to hot water in remote locations. All you need is a cold-water source from a tank, stream, or domestic supply and it can be heated to any temperature up to 140°F instantly. It can be used for a variety of situations, including:

Browse through our selection of quality conventional tank water heaters. We recommend installing a tankless water heater because hot water only runs when you turn on the faucet. It operates more efficiently than conventional units do. If this option is not available, we can provide you with a quality tank-type water heater.

The LG system is a highly efficient ductless system that you can use to heat or cool your property. It's ideal for places where ductwork is not an option and it can be used in conjunction with other systems that heat and cool hard-to-manage areas. These systems are efficient and economical, with an energy saving up to 28 SEER. The new INVERTER technology operates at nearly any temperature outside.

The LG system consists of three basic parts: the outdoor condensing unit, the indoor wall or ceiling unit(s), and the components to link the two. The new (Multi F Max Inverter) system will supply up to eight indoor units from one condensing unit outside. LG HVAC systems offer many different solutions that are economical, quiet, and attractive. The LG offers a great alternative to central air conditioning. If you have baseboard heat and no ductwork, the LG makes for a great alternative option.

The LG system offers many different advantages such as: 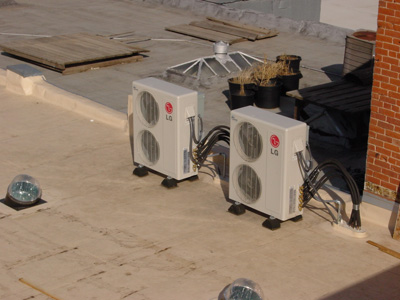 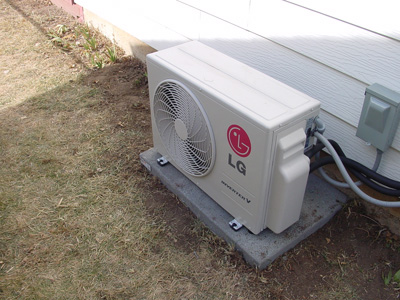 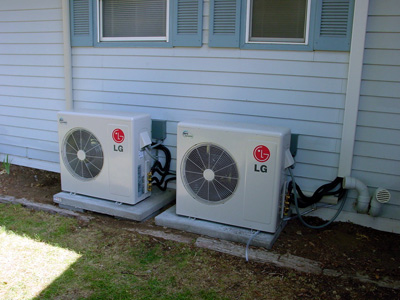 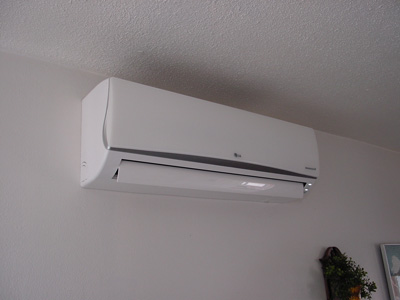 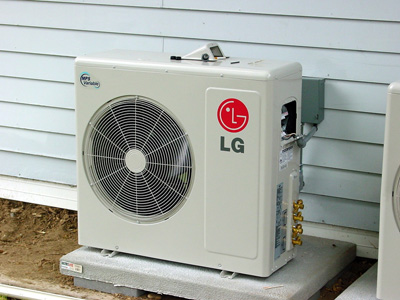 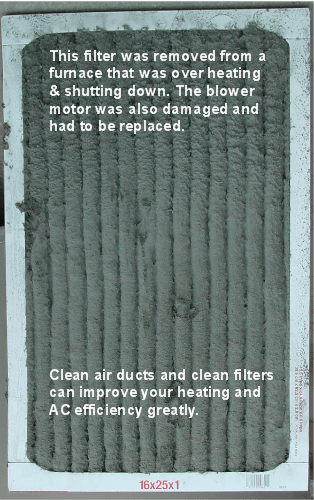 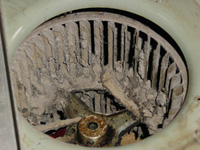 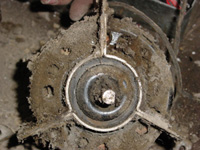 We have the most up-to-date technology and equipment that allow us to locate the problem and clear any drain blockages with our water jet machine, so that waste can flow freely to the city sewers. The water jet machine blasts the drain line at 1800 PSI. After cleaning the lines, we send our camera down the line to view and locate any potential further problems. 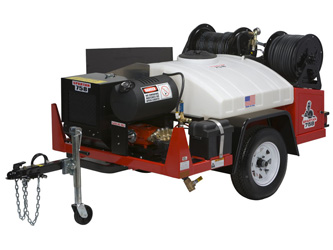 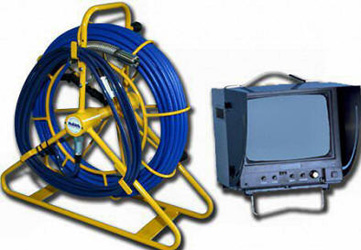 This next generation flood prevention system will shut off your main water to the house if it detects a water leak. Approximately 25% of homeowners have experienced water damage from appliance leaks and broke or frozen pipes. WaterCop Automatice Water SHut-Off systems are a time tested tool in reducing the chances of major household plumbing leaks. 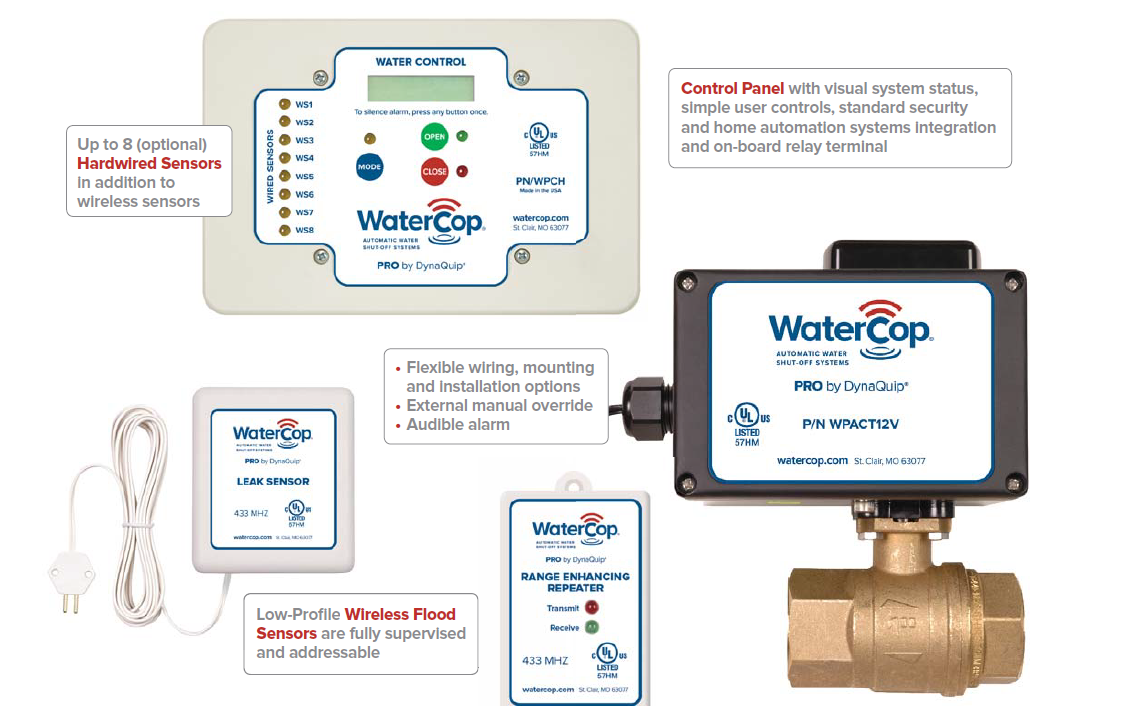 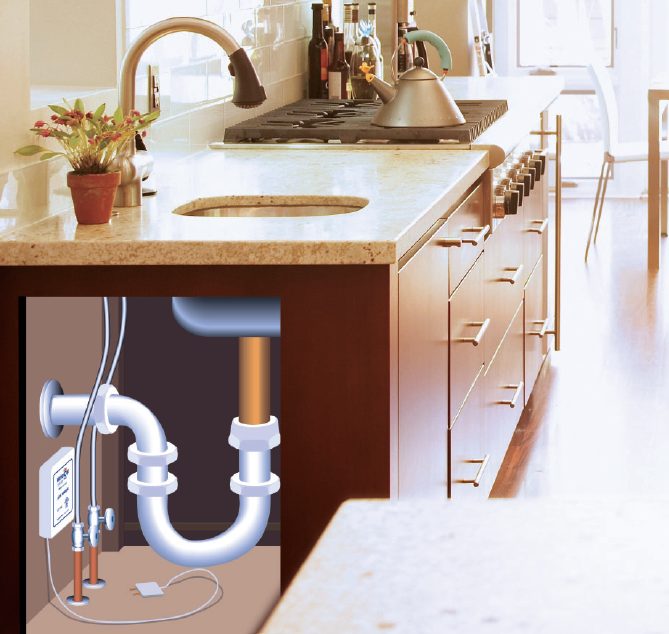 There is a wide difference between air filtration and air Purification.
Air filtration is commonly used in most standard systems and filters the larger particles that are suspended in the air as it passes through the system. Depending on the density and surface area of the filter it can cover a wide range of particulates. This is not a bad thing but people with allergies to pollens, pet dander, smoke and other allergens might not get the full benefit with this type of filtration.

Air Purification systems also have a wide variety of systems that will further filter and also purify to a greater quality than the standard filtration. These systems will in most cases help filter, catch and kill the smaller particles that are more health damaging to vulnerable family members. There will be a wide price range associated with the different products. The most expensive is not always the best for each individual. It is more economical to install most systems when the home is built but in existing homes without purification, there are products that are less costly and work well with the existing equipment. For best results it is recommended that the air ducts be cleaned and sanitized before the new purification equipment is installed. This will allow a clean start up on your system. 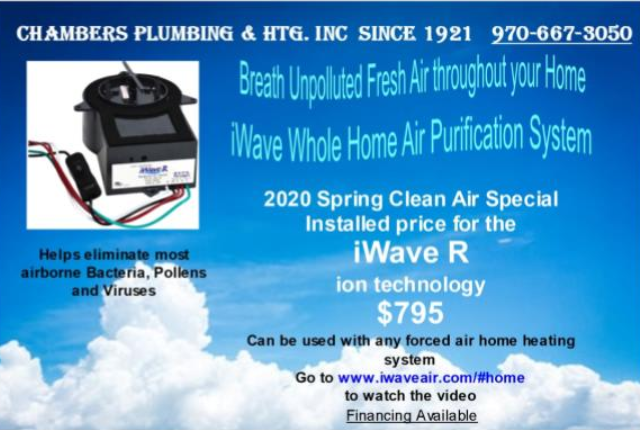 How iWave Works
iWave is an air purifying device that installs in any duct air conditioning system. When air passes over the iWave, ions produced by the device reduce pathogens, allergens, particles, smoke and odors in the air, creating a healthy environment without producing any harmful byproducts.
iWave uses patented technology, called needle-point bi-polar ionization, to create equal amounts of positive and negative ions. When these ions are injected into the air stream, they break down passing pollutants and gases into harmless compounds like oxygen, carbon dioxide, nitrogen and water vapor (see illustration below). 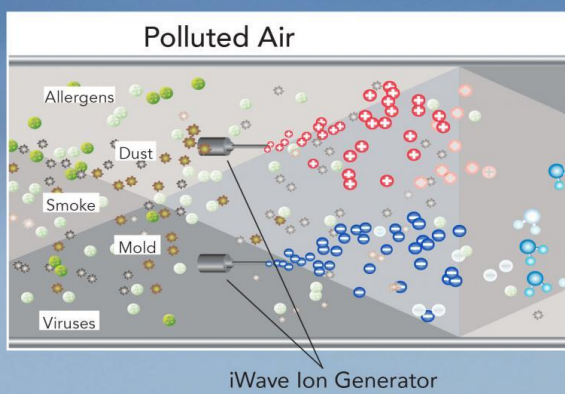 When the ions come in contact with viruses, bacteria or mold, they remove the hydrogen molecules - without them, the pathogens have no source of energy and will die. The ions also attach to allergens like pollen and other particles, causing them to band together until they are large enough to be caught by your ventilation system's air filter.
iWave's technology generates the same ions that nature creates with lightening, waterfalls, ocean waves, etc. Nature uses energy and shear to break apart molecules, naturally cleaning the air and producing a healthy environment. The only difference between the iWave's technology and nature is that the iWave does it without developing harmful ozone.